CITY OF NEWBURGH  Yul Bookal bowed his head, bit his lip and apologized to his son.
Marc, I'm so sorry you didn't get your speed racer you wanted for Christmas.
He began weeping under his dark sunglasses. He sniffled and cried so hard that he squealed with each breath.
I wanna let you know I'm never gonna forget you.
The sorrow grew too heavy. Yul Bookal collapsed on his 4-year-old son's casket. He pressed his face against the shiny, pearl-white wood and continued.
I know you're in heaven, I know you're in a better place, but I'm gonna miss you. I'm gonna come to you and read to you on every birthday.
Tears fell from the faces of the 250 mourners. Ushers in the House of Refuge on Broadway passed out tissue boxes. Some put an arm around their neighbors. Others covered their swollen eyes.
Newburgh has put a lot of young men in coffins lately. But no little boys. Not until now.
Marc Anthony Bookal was laid to rest Saturday, 131 days after he disappeared from his mother's home on Benkard Avenue.

Marc Bookal remembered as having one of the kindest hearts‎

GOSHEN  Christina Bookal admitted to a judge she should never have left her children in the care of her boyfriend, Cory Byrd.

Bookal's 4-year-old son, Marc Bookal, disappeared in December while Byrd was supposed to be looking after him. Police found Marc's lifeless body three months later, hidden in a book bag under a pile of brush down the hill from his home. Prosecutors and police have described Byrd as a "person of interest" in Marc's killing.

On Tuesday, Christina Bookal appeared in front of Family Court Judge Debra Kiedaisch to answer charges of neglect in regard to Marc and her other three children.

Marc's father, Yul Bookal, was also in the courtroom to seek custody of his 6-year-old son who lives with Christina Bookal in her Benkard Avenue home.

Christina Bookal sat next to her attorney, Geoffrey Chanin, and answered a quiet "Yes" when Kiedaisch asked whether she wanted to make any admissions. She admitted she left her children alone with Byrd even though she knew he had a violent history, including a conviction of reckless endangerment for hurting her oldest son in 1998. Byrd was also convicted of viciously beating and slashing the face of an 18-year-old in 2002.

In exchange for her admission, Kiedaisch granted Christina Bookal an adjournment in contemplation of dismissal, meaning the case could be dismissed if she complies with a long list of conditions during the next 12 months. The conditions include completing a parenting class and regular in-home visits from caseworkers.

Her children will continue to live with her unless she violates those conditions. If that happens, the kids could be put into foster care.

Byrd was also set to face charges, but he's in prison on a parole violation and wasn't brought to court. The charges against him were dismissed but could be re-filed later.

After court on Tuesday, Yul Bookal said he thought the kids should have been taken away long before Marc disappeared. Now, he wants the court to give him custody of Marc's 6-year-old brother. Kiedaisch scheduled an August court date on that issue, giving Yul Bookal time to find an attorney.

Christina Bookal's eyes were still rimmed red from tears when she left court. She declined to say much about the case other than she was happy her children would remain with her.

http://www.recordonline.com/apps/pbc...334/-1/SITEMAP
_________________
Anything that I say which is not referenced to an original source is entirely my own opinion.
May we all continue to work together to bring Madeleine home.

On December 14th back in 2009 Marc Bookal went missing from his home on Benkard Avenue in the City of Newburgh.

In March of 2010 the partially decomposed body of young Marc was found concealed in layers of trash bags and hidden amongst piles of brush.

According to DA Phillips, As a result of an autopsy it was determined that Marc Bookal died as a result of blunt force trauma and numerous injuries throughout his body and upon his head.

At the time of Marcs death it is alleged that Cory Byrd was in charge of
babysitting him and Byrd had claimed then that Marc had left the home under his own accord to visit a neighbor, said Phillips.

As of now, Byrd is currently being held in state prison pending trial on charges of:

An Orange County man has been indicted on murder charges for the beating death of his girlfriend's 4-year-old son, whose body was found in woods a few blocks from home three months after he went missing.

Goshen  Cory Byrd has been indicted on multiple charges in the death and murder of four-year- old Marc Anthony Bookal.

Bookal was reported missing from his Benkard Avenue home in the City of Newburgh on December 14, 2009. According to Cory Byrd, the live in boyfriend of Marc Anthony's mother Christine, Marc Anthony wandered off from his house to allegedly visit a neighbor.

Orange County District Attorney Frank Phillips said that an autopsy performed on Marc Anthony determined the cause of death to be the result of blunt force trauma and numerous injuries to his body and head.

Byrd had been taken into custody, after initial police questioning, and held for parole violation. He is currently being held in a state prison pending the trial of these charges:

Christina Bookal woke on Thursday morning with the latest of horrible tasks in front of her.

She'd learned on Wednesday that her former boyfriend, Cory Byrd, was indicted on murder charges in the death of her 4-year-old son, Marc. An assistant district attorney had called and explained the charges: two variations of murder and two variations of manslaughter, meant to hold Byrd responsible for the brutal death of Marc.

Bookal spent the night watching news accounts of how prosecutors say her boy died. He was bludgeoned again and again, she learned. Investigators had found injuries to her son's brain and his little body that told of a severe beating.

Bookal said a numbness settled over her after Marc disappeared in December 2009. It made it hard to make sense of the most mundane tasks, but she knew Thursday what she had to do. She spoke to her two oldest children and told them their father had killed their brother.

"I try to tell them, don't let what your father did ruin your lives," Bookal said. 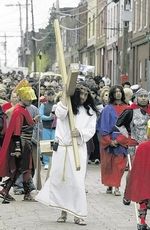 The annual Stations of the Cross procession held by St. Patricks Church in Newburgh has expanded to include period costumes and a bilingual service. Above, Esteban Guerrero of Marlboro portrays Jesus.

.... Places where the parishioners stopped along the way were all associated with a murder or other tragedy.

On Benkard Avenue, where 4-year-old Marc Anthony Bookal lived before he was killed more than a year ago, the marchers paused, and Jesus, portrayed by Esteban Guerrero, was whipped and crowned with thorns.